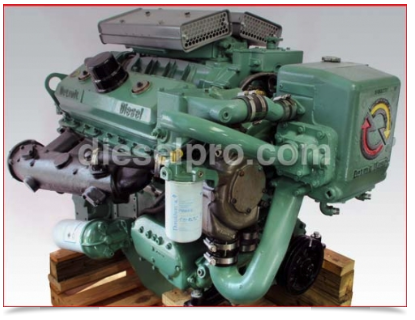 Guide To Tuning Up Your Detroit Diesel 92 Series Engine

In this article we cover a basic tune up for a Detroit Diesel 92 Series engine.  Your 92 series engine has no scheduled interval for performing an engine tune-up. As long as the engine’s performance is satisfactory, no tune up should be needed. Minor adjustments to the valve and injector operating mechanism, gover, etc should only be required periodically to compensate for normal wear and tear on parts.

The type of governor used depends on the engine applications. Since the application of the governor has different characteristics, the tune-up procedure varies accordingly. The following types of governors are used.

Normally, when performing a tune-up on an engine in service, it is only necessary to check various adjustments for a possible change in settings. However, if a cylinder head, governor, or injectors have been replaced or overhauled, then certain preliminary adjustments are required before the engine is started.

The preliminary adjustments consist of the first four items in the tune-up sequence. The procedures are the same except the valve clearance is greater for a cold engine.

Use new rocker cover gaskets after the tune up is completed.

CAUTION: An overspeeding engine can result in engine damage which could result in personal injury.

Full notes about how to tune up your engine can be found in your service manual for Detroit Diesel 92 Series engine.

The correct exhaust valve clearance at normal engine operating temperature is important for smooth efficient operation of the engine.

Whenever a cylinder is overhauled, the exhaust valves reconditioned or replaced, or the valve operating mechanism is replaced or disturbed in any way, the valve clearance must first be adjusted to the cold setting to allow for normal expansion of the engine parts during the engine warm up period. This will insure a valve setting that is close enough to the specified clearance to prevent damage to the valves when the engine is started.

The exhaust valve bridges must be adjusted and the adjustment screws locked securely at the time the cylinder head is installed on the engine. The necessary adjustment procedure is outlined in Section 1.2.2 of your service manual.

The exhaust valve bridge balance should be checked when general valve adjustment is performed. After the bridges are balanced, adjust the valve clearance at the push rods only.

Do not disturb the exhaust valve bridge adjusting screw.

All of the exhaust valves may be adjusted in firing order sequence during one full revolution of the crankshaft. Refer to the General Specifications section of your service manual for the engine firing order.

Note: If a wrench of barring tool is used on the crankshaft bolt at the front of the engine, do not turn the crankshaft in a left-hand direction of rotation or the bolt may be loosened.

Maintaining normal engine operating temperature is particularly important when making the final exhaust valve clearance adjustment. If the engine is allowed to cool before setting any of the valves, the clearance when running at full load, may become insufficient.

To time an injector properly, the injector follower must be adjusted to a definite height in relation to the injector body.

All of the injectors can be timed in firing order sequence during one full revolution of the crankshaft. Refer to the General Specifications at the front of your service manual for the engines firing order.

After the exhaust valve clearance has been adjusted, time the fuel injectors as follows:

The single-weight variable speed governor is mounted at the front of the engine and is driven by a blower rotor.

After adjusting the exhaust valve and timing the fuel injectors, adjust the variable speed mechanical governor and position the rack control levers.

With the engine stopped and at normal operating temperature, adjust the governor gap as follows:

The position of the injector control rack levers must be correctly set in relation to the governor. Their position determines the amount of fuel injected into each cylinder and ensures equal distribution of the load.

Properly positioned injector rack control levers, with the engine at full load, will result in the following.

IMPORTANT: The above step should result in placing the governor linkage and control tube assembly in the same position that they will attain while the engine is running at full load.

CAUTION: Once the No. 1L and No1R injector rack control levers are adjusted, do not try to alter their settings. All adjustments are made on the remaining control racks.

11) Insert the clevis pins in the fuel rods and the injector control tube levers.

All governors are properly adjusted before leaving the factory. However, if the governor has been reconditioned or replaced, and to ensure the engine speed will not exceed the recommended no-load speed as given on the engine option plate, set the maximum no-load speed as outlined below.

Start the engine and, after it reaches normal operating temperature, determine the maximum no-load speed of the engine with an accurate hand tachometer. Then stop the engine and make the following adjustments, if required:

IMPORTANT: If the maximum no-load speed is raised or lowered more than 50rpm by the installation or removal of shims, recheck the governor gap. If readjustment of the governor gap is required, the position of the injector racks must be rechecked.

NOTE: Governor stops are used to limit the compression of the governor spring, which determines the maximum speed of the engine.

With the maximum no-load speed properly adjusted, adjust the idle speed as follows:

NOTE: The recommended idle speed is 500rp but may vary with special engine applications.

NOTE: Do not raise the engine idle speed more than 15 rpm with the buffer screw.

With the idle speed adjusted, adjusted the booster spring as follows:

All instructions, diagrams, videos have been checked for accuracy and ease of application; however success and safety in working with tools depend to a great extent upon individual accuracy, skill, and caution.  For this reason, the authors are not able to guarantee the result of any procedure contained in this blog post. Nor can they assume responsibility for any damages to property or injury to persons occasioned from the procedures. Persons engaging in the procedures do so entirely at their own risk.